The church was built in 1861 as a Chapel of Ease, so local families didn’t have to travel to All Saints church in Alrewas. The Rev. Hazelhurst  (vicar of Alrewas) was instrumental in getting St. Stephens built.

Bricks for the Church (and later, the school next door in 1874) were carried by locals from the then brickyard at Hilliards Cross where they were made.

The Coffin Trail was the route taken between Fradley and All Saints Church and would have been used for hundreds of years. We hope to publish this route on one of our village walk leaflets in due course.

The Church was consecrated by the Bishop of Lichfield on 23rd May 1861. At the time, the village was very small and based on an agricultural economy. St Stephen’s unusual design and its position on the corner of Old Hall Lane has made it a landmark feature for the village.

It has some interesting architectural features including the beautiful stained glass window, the impressive vaulted wooden roof and the pipe organ. 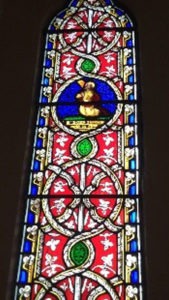 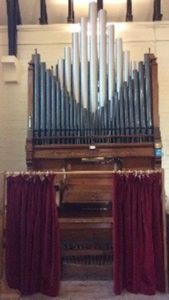 The Church had a new roof in 2015 which was an essential maintenance project involving much local fund-raising through individual donations, legacies, village events such as sponsored walks, afternoon teas and grant awards from Garfield Weston, Staffordshire Historic Churches Trust, Allchurches Trust and St. Stephen’s Church own funds.

Other recent additions have reflected the Church’s expanding role and services offered to the local community. In 2007 a new meeting room with disabled toilet was built including a hearing loop and full wheelchair access which were consecrated by the Bishop of Wolverhampton in 2008. This was followed by further works in 2010 to upgrade the drainage system, rewire and install new lighting and heating systems plus redecorate the interior of the church.   Other previous work has included the restoration of the bell tower, porch and removal of six rows of pews to create a more flexible area for worship.

These additions have allowed local groups such as Fradley Community Choir to meet there on a regular basis, to develop groups like Messy Church and Wednesday Welcome and generally increase the Church’s use and accessibility to the community.

The graveyard is populated by not only local families, but also servicemen serving at RAF Lichfield.  There are 8 RAF, 1 German and 24  Royal  Australian Air Force servicemen commemorated in the graveyard.

It should be mentioned that a team of dedicated volunteers help maintain the graveyard through the year and they were rewarded in 2017, by winning a gold award in the Diocese of Lichfield Churchyard competition. This a fantastic achievement and a credit to the Church and it’s tireless volunteers.