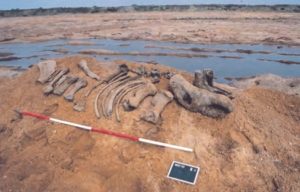 A number of archaeological digs have been completed in Fradley, showing how the landscape has changed and how people have populated this area for a very long time. The earliest record we have is from quarrying activity carried out towards the River Tame, on the eastern boundary of Fradley. The excellently preserved remains of a woolly Rhinoceros were found here, evidence that this area was very cold approx. 41 – 43,000 years ago (mid-Devensian). The full report can be read below:

Evidence of early occupation in this area was also found towards the River Tame at Whitemoor Hayes. Worcestershire Archaeology have been collecting evidence from this area for a long time as a result of increased quarrying activity here. Their findings suggest that people could have be living in this area as early as the Mesolithic (10,000 – 8,000 BC), but more evidence is found in the Bronze Age (2500 – 800 BC ) and Iron Age (800 – 50 BC), leading through to Roman times (43 – 410 AD).

The latest report can be read below, along with earlier reports: 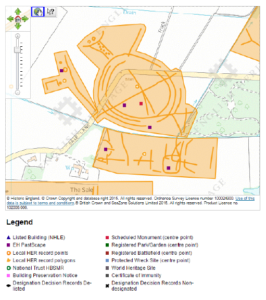 Evidence of an early Neolithic causewayed enclosure have been discovered at ‘The Sale’ in Fradley and were excavated by Birmingham University in 2015. Dating evidence suggests this was constructed around 3500 BC. This is identified as being a Scheduled Ancient Monument.This report can be read below:

The best evidence we have of Roman influence in this area is Rykneld Street, or the A38 as we know it. This is thought to have been constructed between 50 – 80 AD and crossed Watling Street, near the Roman Settlement at Wall (Letocetum), just South of Lichfield. Rykneld Street was a very important road linking Gloucestershire to South Yorkshire on a SW – NE route and perfectly straight for many miles.